View cart “I Survived The Sinking Of The Titanic 1912” has been added to your cart. 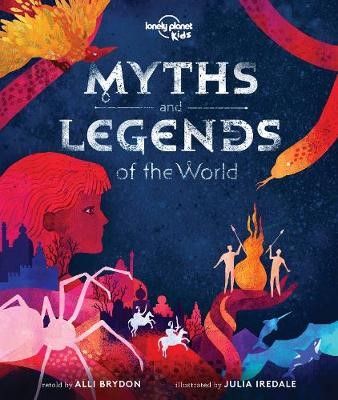 Myths And Legends Of The World

Bold reader – open your mystical map and get ready to travel through time with 21 dazzling stories of daring and deceit, reward and punishment. Meet gods, goddesses and demigods, serpents, coyotes, talking fish and clever spiders, and cavort with sea nymphs, mystical women, terrifying beasts and volcano people – as you discover different tales of how the world began.

These powerful, fascinating myths and legends will transport you to every corner of the globe. You’ll journey from ancient to modern times, from hot climates to freezing temperatures, from mountaintops to seafloors.

The stories in this book link you to past generations; these tales have been passed down through a long line of oral traditions. The souls of ancestors, the lives of heroes and the fates of mortals are waiting to be discovered.

Myths and legends are retold by Alli Brydon and beautifully illustrated by Julia Iredale.

Myths from Africa include:

Myths from Europe include:

Myths from Asia include:

Myths of Oceania include:

Myths of the Americas include:

Myths from the Arctic include: