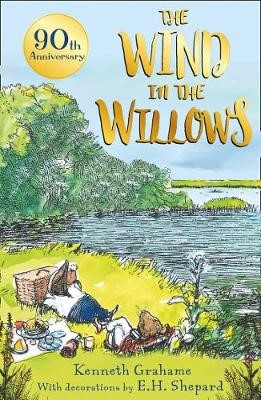 The Wind In The Willows (Anniversary Edition)

“There’s nothing – absolutely nothing – half so much worth doing as messing about in boats…. “

One of the all-time great animal stories. Kenneth Grahame’s classic children’s book, with exclusive illustrations from EH Shepard has delighted generations. The Wind in the Willows is one of the most famous and bestselling animal stories of all time. This exclusive 90th anniversary paperback edition celebrates E.H. Shepherd’s classic illustrations that brought Mole, Ratty, Badger and Mr Toad to life 90 years ago and have captivated children and adults alike ever since.

The Wild Wood seems a terrifying place to Mole, until one day he pokes his nose out of his burrow and finds it’s full of friends. He meets brave Ratty, kind old Badger and the rascally Mr Toad, and together they go adventuring … but the Wild Wood doesn’t just contain friends, there are also the sinister weasels and stoats, and they capture Toad Hall when Mr Toad is in jail. How will he escape? And can the friends fight together to save Toad Hall?

Kenneth Grahame’s The Wind in the Willows is a classic animal adventure that charms and enthrals. This new paperback edition contains the original black and white illustrations by E H Shepard, the man who drew Winnie-the-Pooh.

The perfect adventure for children aged 5 and above.