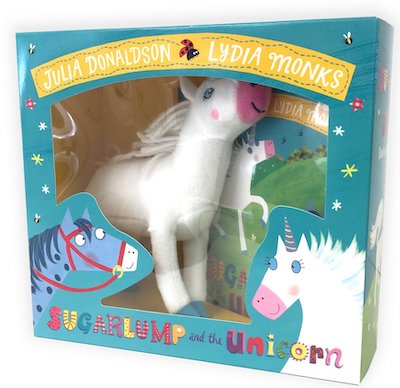 Sugarlump And The Unicorn – Julia Donaldson

Follow the adventures of Sugarlump the rocking horse, with this magical gift set including a mini hardback edition of Sugarlump and the Unicorn and a unicorn plushie.

When a rocking horse named Sugarlump longs to see the world, a magical unicorn with a silver horn and sparkling blue eyes grants his wish and turns him into a real horse. But after trotting around the farm, galloping around a racetrack, and even dancing at the circus, Sugarlump learns to be careful what he wishes for. Luckily the unicorn has one more wish to grant.

Enjoy this delightful rhyming adventure from the stellar picture book partnership of Julia Donaldson and Lydia Monks, creators of What the Ladybird Heard, with this magical book and toy gift set. Including a mini hardback and a plushie based on the unicorn from the book, the Sugarlump and the Unicorn Book and Toy Gift Set is the perfect gift for unicorn lovers everywhere!